Oklahoma City is located in the very heart of Oklahoma. All roads seemingly lead to OKC. As you head west from Oklahoma City, the population starts to thin out pretty quick, which means it really is on the edge of the frontier. That can make Oklahoma car transport a tad harder.

Oklahoma is the 20th biggest state physically, and has the 28th largest U.S. population with just under 4 million people. Most of those folks live in Oklahoma City and to the east of it. The most heavily populated cities over 100,000 people are Oklahoma City, Tulsa, Norman, Broken Arrow and Lawton. That makes those cities easiest for our Oklahoma vehicle transport quotes, because the higher the population density, the higher the vehicle shipping truck traffic. Makes sense, doesn’t it? 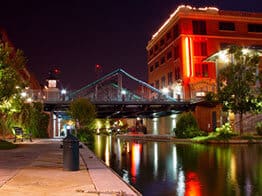 So we recommend trying to ship your vehicle from one of those five cities to increase your chances of a fast vehicle transport. Of course there are other Oklahoma towns that aren’t so bad to ship a car. They are Moore, Midwest City, Enid, Stillwater, Muskogee and Bartlesville, which are all fairly nice size towns for Oklahoma car transport.

Oklahoma is just far enough south that it misses most of the harsh winter weather in the Great Plain states to the north. Hey – sometimes it gets really cold and occasionally a snowstorm, but neither usually lasts very long. The snow melts and warmer temperatures are never too far away. All that makes Oklahoma much more predictable and therefore reliable as a conduit for interstate vehicle transport companies, of which Direct Express Auto Transport is one of the best.

A fun fact about Oklahoma is that it gets its name from the Choctaw words “okla” and “humma”, which mean “red” (okla) “people” (humma). Choctaw Chief Allen Wright came up with that in 1866. It was his vision that the Indian Territory that was Oklahoma would be admitted to the union as an almost entirely Indian state, as several tribes populated and controlled the region. It was a great idea until the U.S. government crossed him up (what else is new?) by allowing white settlement in 1888. Today nearly 7% of Oklahoma is native American.

Vehicle transports go best in the triangle from Oklahoma City to Tulsa to Fort Smith. So try to ship to or from there.

Being on the Frontier Strip and in the center of the United States, means Oklahoma is about 1,500 miles away from many places west and east. As in Los Angeles, San Francisco, Seattle, Boston, New York, D.C., Charlotte, Florida and more. It seems like it’s a three day carrier transport ride from so many places. That makes it very accessible.

Direct Express Auto Transport originated the instant online vehicle transport quotes calculator. Not just in Oklahoma, our quote calculator works better than any other throughout the United States. The cheap knockoffs do not come close as our expertise shines through and provides the most reliably competitive rates to ship your car.

We do not ask for any personal information before giving an Oklahoma car transport quote. So many people have come to rely upon the accuracy and speed of our vehicle transport rate calculator. And hopefully you will too! Please visit Direct Express Auto Transport to fill out a simple form and get a free car shipping quote. We make it easy to book your vehicle shipment online.