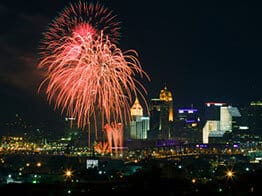 Ohio has one of the largest and best highway systems in the country, making it easy for auto shippers and our car transport rates calculator in particular. Just look how nicely the Ohio auto transport system is designed.

Three very important east-west interstates make their way thru Ohio, and they are I-90, I-80 and I-70. That means our car transport rates calculator enjoys an advantage when shipping customer vehicles to Ohio. As well, the major metropolitan areas make it all the more easier with a series of interstate beltways: I-480 and I-271 in Cleveland, I-76 and I-277 in Akron, I-680 in Youngstown, I-475 in Toledo, I-270 in Columbus, I-675 in Dayton, and finally I-275 in Cincinnati, the Queen City of the West. Because Ohio is laid out so wonderfully with an intricate car transportation system, there are few excuses when it comes to shipping a car to the major cities there.

Interstate I-90 slices across the entire northern border of Ohio, along Lake Erie and just south of Michigan. Parts of I-90 in Ohio is shared with I-80, which will carry on to California to the west, and Pennsylvania to the east. I-90 runs coast to coast, from Massachusetts to the state of Washington. I-75 runs north-south from Michigan down the western side of Ohio thru Toledo, Findlay, Lima, Dayton and finally Cincinnati before crossing into Kentucky. It is a major interstate route traversing from Michigan to Florida. I-71 cuts diagonally southwest from Cleveland thru Mansfield, Columbus and as well Cincinnati before crossing the Ohio River into Kentucky.

Like I-71, I-77 also starts in Cleveland, which is Ohio’s largest metropolitan area, and heads dead south thru Akron, Canton, intersecting I-70 at Cambridge, and continuing on to Marietta before crossing the Ohio River into Parkersburg, West Virginia. Interstate I-70 cuts Ohio almost exactly in half east to west from Wheeling, West Virginia thru Zanesville, Columbus, Springfield, brushing by Dayton before entering Indiana near Richmond. I-70 starts in Washington, D.C. and makes quite a journey across the heartland of America before ending suddenly and without fanfare in Utah where it meets I-15.

What You Should Know About Ohio Auto Transport Quotes

Ohio is considered a northern state and gets the full effect of the change of seasons. The winter snow begins to thaw in March and by April the roads are clear and easily passable. Summers are usually hot and humid, as in sticky hot, where a person feels like showering a few times per day. Perfect however for auto shippers. Summer is high season for the auto transport industry and Ohio is a big part of that. More Ohio auto transport shipments occur in June, July and August, than

Autumn is beautiful in Ohio as the trees turn a fireball red and bright yellow. The fair weather usually hangs on until late November or early December, meaning there is no reason not to have a successful auto transport shipment. But the winter weather usually turns foul in December and almost certainly in January and February, when heavy snows and freezing conditions make shipping a car either from or to Ohio very difficult. So patience and understanding is advised during Ohio’s winter season. Our car transport rates calculator adjusts for that.

1. The best places in Ohio to ship your car are greater Cleveland, Columbus, Cincinnati and Dayton.

2. The second best places that are still very good are Akron, Canton, Youngstown and Toledo.

3. Southeastern Ohio becomes difficult. It’s hit or miss there because it is more rural.

4. Northwestern Ohio below Toledo and hugging the Indiana border tends to be a tad slower as well. But not always.

5. Most vehicles regardless of where in Ohio usually ship in a timely manner, but if at all possible, you get can get faster action meeting a driver somewhere in the larger metropolitan areas.

Direct Express Auto Transport originated the instant online quote generator and has perfected it like no other. Our car transport rates, quotes, estimates or prices, whatever you want to call it, are usually spot on in order to ship your vehicle within one week of availability. Please visit Direct Express Auto Transport to fill out a simple form and get a free car shipping quote. We make it easy to book your vehicle shipment online.

Spring break isn’t just for rowdy college kids. It’s not even just for kids. Family-friendly spring break trips are good for parents too, and since the kids are already out…

How Best To Schedule Your College Student Auto Transport Every August, we see a spike in college student car shipping. We offer here some good advice on how best to…

Click PDF image below to download Shipping Your Car for the First Time Whether you are prepping for a big cross-country move, finally letting go of your old reliable car…