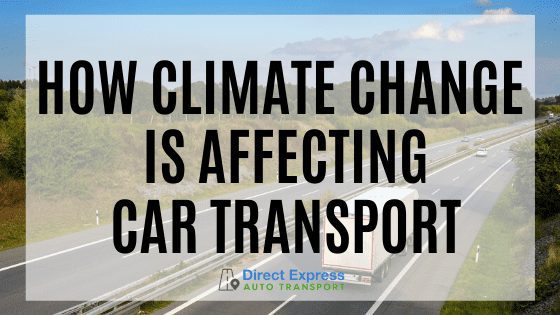 Climate change is one of the most influential forces in the 21st century, and it doesn’t appear to be going anywhere anytime soon. While most people associate climate change with big things like warming winters and an increase in ecological disasters, this global phenomenon also impacts society, commerce, and the environment in smaller, less apparent areas. One of those areas is car transport. Car manufacturers are starting to pivot towards cleaner energy in response to climate change, and with this pivot the auto transport industry is also beginning to change. We know the auto and auto transport industries are changing for the greener, but we may not understand the science behind why they are changing.

If you’re interested in how climate change is affecting car transport, this is the guide for you. Our experts here at Direct Express Auto Transport don’t just specialize in getting your car from point A to point B safely, quickly, and efficiently — we also know a thing or two about the science of climate change and its impact on all things auto. Below, we bring you up to speed on how climate change is quickly changing many aspects of vehicle transportation.

Climate Change and the Auto Industry: A Basic Overview

To truly understand how climate change is impacting the auto transport industry, it’s vital first to understand what climate change is and how it works. The burning of fossil fuels, such as diesel and gasoline, releases carbon dioxide into the atmosphere. Carbon dioxide is a greenhouse gas, and it is being pumped into the atmosphere along with other greenhouse gases (such as nitrous oxide, methane, and hydrofluorocarbons) at a far higher rate than at any other time in the Earth’s history.  These greenhouse gasses are quickly disintegrating the Earth’s atmosphere, which is the key force that regulates Earth’s climate so that it can support life.

What Are The Most Obvious Signs of Climate Change?

According to the United States Geological Survey, you don’t need to be a scientist to see the effects of climate change. All of us are witness to the following changes to our environment.

Addressing Climate Change in Transportation: What Comes Next

As science and society gain new knowledge about how quickly climate change is happening and continue to advance car battery technology, the auto industry is starting to wean itself off of gasoline and diesel. Nearly all major automakers are now pivoting their manufacturing to electric vehicles.

In the truck industry, where diesel reigns supreme, moving to alternative solutions has proven to be a bit more difficult — but progress is being made. In 2017, Tesla announced an Electric Semi Truck slated to launch by the end of 2020, with more companies projected to follow in moving away from fossil fuels towards cleaner (and eventually cheaper) energy for auto transportation.

What’s Greener? Driving Your Car Across Country or Shipping It?

While the auto transport industry has yet to make the change to cleaner energy (but probably will in the next decade), there are still eco-friendly benefits to shipping your car. Is it cleaner to drive a vehicle across the country or to ship it? The answer, as we discuss below, depends on a few factors.

If your car is non-electric, it is going to be significantly more energy-efficient to ship it instead of drive it. In America, auto transport trucks generally carry anywhere from five to nine vehicles on their backs at one time. Over the years, the auto transport industry has optimized logistics to ship all or most cars on a single freight truck to the same general area. While 18 wheelers emit more greenhouse gasses than normal cars, they definitely don’t emit more gasses than five separate cars all driving the same route.

Ship with the Best: Ship with Direct Express Auto Transport

Interested in learning more about how climate change is affecting car transport? Our team of experts at Direct Express Auto Transport is here to help. Contact us to speak with a member of our team directly, or visit our Blog for a host of in-depth auto transport resources. Looking to transport your car? You’re in the right place. We offer both covered and uncovered car transport options, and we proudly ship everywhere in the lower 48. With industry-leading logistics, affordable prices, fast shipping times, and exemplary service, we’ve earned a 94% 5-star rating on Trustpilot and thousands of satisfied customers nationwide.

When you ship with us, we’ll work diligently to optimize your car’s route and keep our carbon footprint as low as possible. Together, we can combat climate change. Check out our Online Quote Calculator to secure an affordable, 100%-transparent quote in seconds and book with us today!

PrevPreviousYour Classic Roadster and the Car Show: How to Get There
NextShipping a Small Vehicle vs a Big Vehicle: What to KnowNext