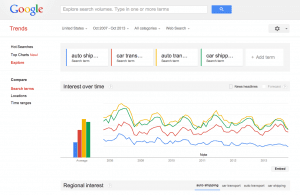 The recent United States government shutdown and near miss on raising the debt ceiling reminds of the dark days of Autumn 2008 when the financial markets melted. Everybody’s 401k took a huge hit and major financial institutions such as Lehman Brothers failed. Remember that horrible day on September 15, 2008? It was bye bye Miss American Pie with one caveat, we couldn’t afford to drive the Chevy to the levy. Scary times because nobody knew for sure when we would hit bottom, how long we would stay there, and if things would ever return to normal? In the months that followed, the number of Google searches for the query auto transport declined by about 20%, but worse still was that the click through rates were even lower. People might look, but they weren’t buying. That meant an overall reduction of about 30% fewer people shipping cars, which meant far fewer people were buying cars to ship, hanging on instead to their older cars until the dust settled. That was bad for the economy and auto transporters.

Warren Buffet once said, “Only when the tide goes out do you discover who’s been swimming naked.” In the auto shipping industry, quite a few companies got caught swimming naked in 2008, found themselves suddenly over-extended, mostly because they were robbing Peter to pay Paul, and went under. Six months later it seemed to most surviving car shipping brokers and carriers that things had returned to normal. What they didn’t realize, of course, is that the industry had actually shrunk along with the economy, the weaker companies eliminated, and those left standing were simply dividing up a smaller pie. That there were fewer competing meant there was enough for everyone. It was classic Darwinian capitalism.

The Wall Street hype is that the economy has rebounded because the stock market has surpassed pre-financial crisis levels, and housing prices are up. It is an illusion. There no longer is much correlation between stock value and the economy, as American capitalism no longer is a market-based economic system. Adam Smith, who wrote the book on capitalism in 1776, viewed it as both competitive and cooperative, a societal system based on self-interest, self-restraint, morality and justice. Now capitalism means maximizing shareholder value for those at the very top, and has little to do with maximizing value for the American working man and woman, those in the middle and bottom, as those folks will be tossed aside if margins are greater elsewhere or in other ways. The way Smith envisioned it, capitalism was a social contract that if left to its own device would benefit the whole society. He never imagined that the local and national interest would be ignored in favor of the corporate interest. Bruce Springsteen still believes in an America that “takes care of its own”, and Adam Smith thought that was a given, but neither of them would understand the mind of Gordon Gecko, where greed is good, and that people like that would actually win. Capitalism as we knew it is gone. The rules are changed and not for the better. It is now a global economy that does not recognize national borders. Rollerball is happening.

The number of people searching online to ship their cars has not returned to anything like 2008 pre-crash levels. What more do you need to know? From 2009 thru 2013 auto shipping flatlined at roughly 20% below 2008. The real economy where 44% of college grads cannot find a job and are living with their parents is here. People are underemployed. If anything, there is a discernible dip in 2013 search queries for car transports that should raise eyebrows. Thank heavens cooler heads prevailed this week and the knuckleheads in Congress opened the government and extended the debt ceiling. Could any of us stomach another financial meltdown? We never really rebounded from the last one. What government is doing wrong is that it is not protecting our Adam Smith capitalist system from vulture capitalists who are not loyal to the American dream, that we can rise together. The financial industry needs regulating in a big way, and if that does not happen we are all in trouble.

Towing vs. Shipping a Car

When you need to move your car from point A to point B, there are a few options. Simply driving your vehicle may top the…

Snowbirds know how to live. While most of us are preparing for winter and the cold temperatures, slick roads, and grey skies that come with…

How to Pick a Car Shipping Company

When shopping for car shipping companies, you should stick to one rule above all else: Do your research. Plain and simple. Find a company that…