Pennsylvania car shipping is a mixed bag when it comes to calculating rates. On the one hand the eastern side near Philadelphia is a hotbed of auto shipping activity. But on the other hand, the central Pennsylvania region is extraordinarily difficult to manage vehicle shipments while the western side near Pittsburgh is only moderately better. So an auto shipper cannot make any one general statement about the auto transport business in Pennsylvania that would ring true for the entire state.

Let’s look at the good news first. Looking at the map of the state of Pennsylvania, which was granted and named in 1681 by King Charles II for William Penn, who was frankly embarrassed by the appearance of vanity, you see a nice crescent shape around southeastern PA that runs along Interstates I-81 and I-78. The southeastern crescent starts just north of Hagerstown, Maryland and traverses through Harrisburg, joins with I-78 toward Allentown before dashing off into western New Jersey. The area also encompasses York, Lancaster and Reading. The real prize, of course, is Philadelphia, the 6th largest metropolitan area in the United States. Auto transport rates and shipments tend to be competitive and move in a timely fashion throughout this ideal location. No small surprise because the famous I-95 corridor runs right through Philadelphia, affectionately called Philly by some, and joins I-76 as well from the west. Having a densely populated area especially along the north-south corridor makes vehicle shipping much easier.

Head due north from Philadelphia about 2 hours (125 miles) on I-476 to the northeast region of Pennsylvania and we find a cluster of small to medium size towns such as Scranton and Wilkes-Barre. This area benefits from being on the major east-west I-80 and I-84 freeways. Lots of traffic passing through. In addition, I-81 and I-380 also intersect Scranton. So while the population of northeastern Pennsylvania pales in comparison to the Philadelphia area, we still have good enough success with our auto transport shipments. Maybe not as quick as Philly, but not bad.

Well, well, well … we certainly have a problem here, don’t we? There is one big chunk of Pennsylvania that is a royal pain in the you know what … to ship a car in or out, and that’s the Appalachian Mountain range. One of the reasons Direct Express Auto Transport is so widely followed and respected is because we don’t sugar coat things. We are not going to tell you what you want to hear, but rather, the truth. Imagine seven to ten vehicles shipping from anywhere in this great country to say … Altoona in the same week. Easier to imagine Philadelphia, Pittsburgh and maybe Scranton, right? So there’s the problem. Our statistics show that over 80% of our auto transport orders ship within one week of availability, often times within a couple days. However, that reverses in the central region of Pennsylvania, where it simply takes longer on average because of the lower population density. Cars ship, but they probably will take longer and there is no way of telling in advance how much longer. Best advice are State College, Johnstown, Altoona and Williamsport, but we still counsel patience. 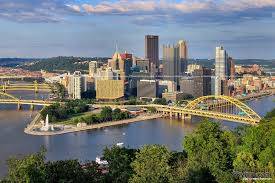 Ever been to Pittsburgh? It is a beautiful city where the Ohio, Allegheny and Monongahela Rivers meet. Check out the photo on this page. Pittsburgh anchors a section of industrial towns that span neighboring northeast Ohio such as Youngstown, and farther south West Virginia’s Wheeling. In our humble opinion, the far western area of Pennsylvania has far more in common with midwestern Cleveland than it does with east coast Philadelphia. Pittsburgh for auto shippers is neither here nor there. Not really attached to the huge populations on the east coast, and not really part of the midwest. It can easily get overlooked and we notice that in our business. Orders that are fairly priced and should ship quickly to or from Pittsburgh sometimes take longer and we frankly scratch our heads. Big enough to get action, but not quite big enough to get super fast action. Well for one, I’ll never forget the Pirates’ Roberto Clemente and Willie Stargell, nor the Steelers’ Terry Bradshaw, Franco Harris, Joe Greene, Lynn Swann, John Stallworth and Jack Lambert. Pittsburgh rocks! We’ll ship those guys’ cars any day!

Pennsylvania only has three relatively reliable areas in which to ship a car with confidence and typically timely service.

They are in order:

1. The southeastern section of PA anchored by Philadelphia and including Harrisburg, Allentown, Lancaster, York and Reading.

Just about everywhere else … patience please … and in some places lots of patience.

The Direct Express Auto Transport quote calculator was the original online and unique to every other. We factor in historical data to generate the most accurate quotes in the business, or so we have been told by carriers and analysts alike. There’s a little extra built in for tough areas because it’s needed. You can visit Direct Express Auto Transport to fill out a simple form and get a free car shipping quote. We make it easy to book your vehicle shipment online.