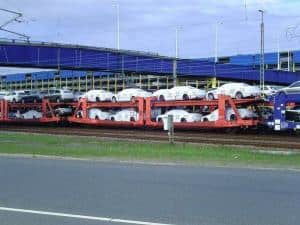 Auto transport by rail is a dying part of the car shipping industry. As sad as that is, it’s a basic fact, and there are several reasons as to why it is slowly being replaced by transport by truck. The very first and most important reason, however, is that railroad transportation in general is dying – the railroads had their heyday, but they are slowly disappearing now as more and more companies begin to turn to alternative methods that are faster and cheaper than moving along the rails.

There are lots of other explanations for the demise of auto transport by rail (which we will explore below), but this industry is in decline for one simple reason: customers don’t like it. Given the choice between auto transport by rail and auto transport by truck, they consistently choose trucks. And that preference has only gotten stronger over time. People have the option to ship their car, truck, van, SUV, or collector car by rail. But they choose not to. Once you dive into the details, it’s easy to understand why.

Why You Should NOT Transport Your Car by Train

Before you decide how to transport your car, ask yourself why you are shipping instead of driving? Either you can’t drive your vehicle for some reason, or you would rather not. Either way, you want to get whatever you drive from your current location to another part of the country as easily as possible. When that’s your priority, auto transport by rail almost NEVER looks like the best option. Here’s what kind of headaches you can expect when you try to transport your car by rail:

The weaknesses of auto transport by train are the strengths of auto transport by truck. Vehicle haulers are more flexible, so much that they can practically provide door-to-door transport anywhere in the lower 48 states. There are tons of qualified haulers on the road, giving you lots of options in terms of scheduling, costs, routes, and even trailer types (open-air or enclosed?). You accomplish the same thing – getting your vehicle someplace without driving it yourself – but you invest a lot less time, stress, and probably money along the way. The choice between train and truck isn’t a choice at all.

Arrange a shipment by truck with the help of Direct Express Auto Transport. Use our car shipping quote calculator to quickly connect with the industry’s top vehicle haulers. Pick one to take your shipment, and now you’re set. Auto transport by truck was already the best option, and we made it even better. Get your quote today, at no cost or obligation, and feel free to request a quote anytime you’re curious about auto shipping options. You’ll be intrigued.